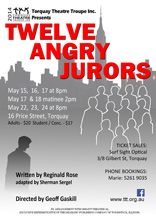 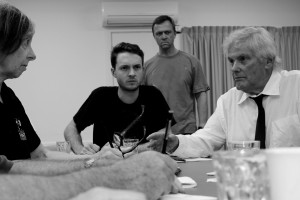 It’s something of a surprise that nobody had thought of this before – that was, to literally update the award-winning all-male 1950s jury-room drama Twelve Angry Men into a time when women could serve on juries. That’s exactly what this production did. It time-shifted the play’s action forward into the 1960s, when women were franchised as jurors, while leaving the plot line court-case pretty much unchanged.
This allowed not only an easier casting task for director Geoff Gaskill (for finding a suitable dozen available male actors would be a tough ask in today’s non-professional theatre) but the inclusion of women jurors brought an extra gender element to his drama, particularly when the two main protagonists were the thoughtful, doubt-ridden Juror 8, portrayed with intense integrity by Meryl Friend, and the overbearing, belligerent Juror 3, from stylish Michael Baker.
These two excellent actors were outstanding in what was a first-rate acting ensemble. And this, combined with tight direction and an innovative theatre-in-the-round staging that allowed the cast space to project their emotions, made for an evening of theatre that was tense, absorbing – and thoroughly deserving of its six VO nominations.

As well as Meryl’s sustained belief and Michael’s memorable meltdown, the play’s acting highlights included Glen Barton ranting revelation of latent bigotry – and the ensemble’s embarrassed reactions; Fred Preston’s study in foreman diplomacy and newcomer Anita Rezzara’s annoying, but tension-lightening self-absorbtion.
Such was the quality of acting on show that the jurors were able to build their individual back stories, from Terry Roseburgh’s rich matriarch, Michael Lambkin’s elderly philosophising, young, ambitious Lachie Vivien-Taylor, thoughtful and moral Stuart Errey, brash, loud businessman Lachie Errey, concerned mid-European migrant Carleen Thoernburg through to Andrew Gaylard’s prissy, precise pedant.
Claire Ramsey’s court official gave these exactly the correct support.
Twelve Angry Jurors made for a delightful evening of theatre. It was another high-quality production from TTT, which continues to impress despite being based in a community without a recognised theatrical venue,.
Go see for yourself. You’ll be impressed, too.
— Colin Mockett