In late August 2021, we have a pair of terrific one-act plays, one of which will be taken to the Anglesea one-act play Festival on 14 OR 15 August.

The plays are Introverts Outing by Sindi Renea, directed by Katrina Eadie and The knock on the door by Bruce Olive, directed by Maryanne Doolan.

We performed on Opening Night (20th August) but were locked down on 21st August at 1pm so needed to revise the dates (again):

Introverts’ outing is a moment in the lives of a group of introverts who have met online and now gather together to meet each other face to face. That’s when the surprises start.

The knock on the door captures the emotion of families who have had a family member away in a war zone and their return home.

The kitchen sink by Tom Wells

An irresistibly funny and tender play about big dreams and small changes.

Amid the dreaming, the dramas and the dirty dishes, something has to give. But will it be Kath or the kitchen sink?

Things aren’t going to plan for one family in Withernsea, Yorkshire. Pieces are falling off Martin’s milk float as quickly as he’s losing customers and something’s up with Kath’s kitchen sink. Billy is pinning his hopes of a place at art college on a revealing portrait of Dolly Parton, whilst Sophie’s dreams of becoming a ju-jitsu teacher might be disappearing down the plughole.

Tom Wells’ play The Kitchen Sink was first performed at the Bush Theatre, London, in 2011. It won its author the George Devine Award and the Most Promising Playwright Award at the Evening Standard Theatre Awards.

This volume also includes the monologue Spacewang, in which a teenage girl roams the streets of Withernsea in search of aliens.

‘This is one of the best new plays I have seen anywhere this year, and I cannot recommend it too highly.’
Charles Spencer – Daily Telegraph 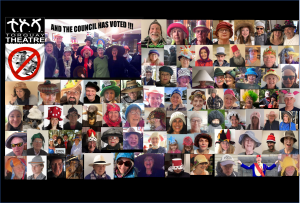 With 2020 behind us and COVID-normal with us, TTT has taken the opportunity to contribute to the development of a plan and a strategy to move into the old basketball court at ‘The MAC’ at 77 Beach Road, Torquay.

This means that the space will be just a wooden floor surrounded by echoing walls, high ceilings and nothing else. As a result, the lights and set and ‘backstage’ will be non-existent for several months and plays will be with the simplest set, lights and staging. BYO cushion.

Our Facebook page will have the most up-to-the-minute information.