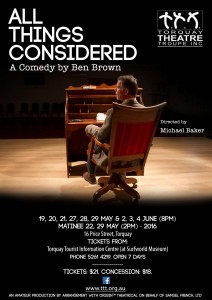 Torquay Theatre Troupe is excited to announce our first play for 2016, All Things Considered by Ben Brown, which will open on May 19. Michael Baker will direct this intelligent, funny play which explores the themes of self determination, suicide, rationality, life and death in a witty and thought provoking way. This is a classically constructed, character-driven sitcom which stays at least one step ahead of the audience with pleasing slipperiness while posing philosophical questions.

Available from the Torquay Visitor Information Centre (next to the Surf World Museum in Torquay).