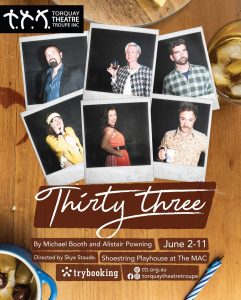 “Thirty-Three” centres around Saskia’s 33rd birthday dinner party. She has invited a handful of her closest friends to her Sydney terrace for an evening of food, music, and good times. But when her estranged little brother mysteriously shows up, the proceedings take on a decidedly different turn, and a friendly evening ignites into a wild night of booze, games, and shocking revelations. 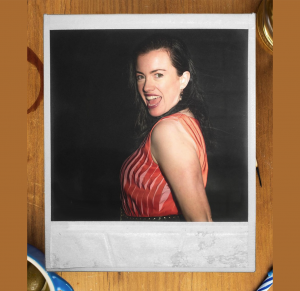 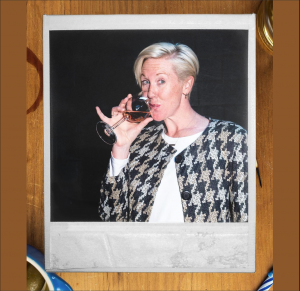 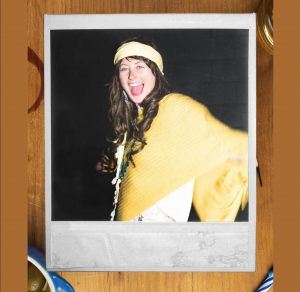 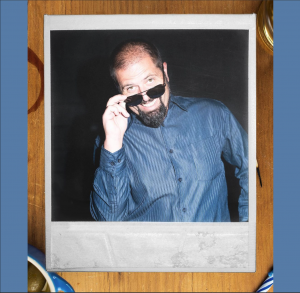 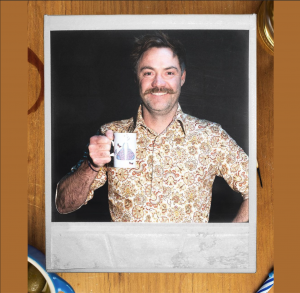 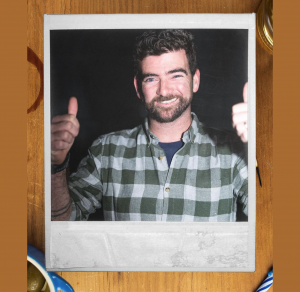 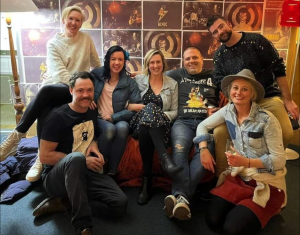 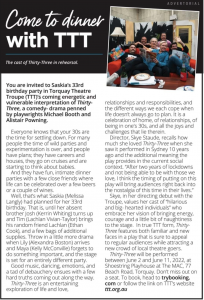 One of the wonders of theatre is its ability to open a window into other times, cultures or emotions. This is most frequently built around significant

events or sentiments – think of the many murders or farcical situations built into classic dramas or comedies. But it’s a rare play that captures a segment of society that is up-to-the-minute and accurate, without mockery, parody or sensationalising.
This play does exactly that. It’s set in today’s time, in the rented Sydney house of a single woman about to celebrate her 33rd birthday with a group of friends.
As such, it is a snapshot of the language, passions and emotions of young adults in Australia in the early 21st Century. It illustrates their strong vocabulary and recreational use of drugs and alcohol, too, which could be a warning to some theatregoers – and a mark of authenticity to others.

There are no murders involved in this play, no wars, robberies, heists or farcical chases. Instead, there are close-up insights into personal and family relationships and the way they intertwine and overlap.
All of the above seen from that unusual thirty-something viewpoint.
There are glimpses of thwarted ambitions, lost and abandoned loves, unresolved rejections and buried resentments.
It’s essentially a rich segment of modern life, really well captured by playwrights Michael Booth and Alistair Powning and authentically portrayed by a talented cast selected and directed by Skye Straude.

Ms Straude and four of her six actors are new to the Torquay Theatre Troupe and it’s very much a compliment to the company’s committee to take this generational leap of faith.
Because such is the quality of stagecraft and acting involved that this Thirty Three deserves full houses with audiences across the age spectrum.

The onstage action is centred around birthday girl Saskia who is discovered alone, quietly preparing for her celebration dinner with a few friends.
That fly-on-the-wall audience perception is cleverly maintained through the use of a single unchanged set, quick blackout changes and some neat lighting effects.
Saskia, stylishly portrayed with understated authority by Melissa Langley, holds the production together through some unexpectedly surprising twists and turns.
These came early, with the first arrival who was not an invited guest, but her estranged younger brother Josh. He was played by Kerrin Whiting, and he didn’t just act his distressed and confused part with believability, he bore a sibling likeness to Melissa.
But then the guests arrived.
These were a choice bunch led by randy over-the-top estate agent Maya, joyously and energetically portrayed by Kelly McConville.
Then came arty musician Lily, who, on the way had been text-dumped by her lesbian lover.  This challenging role was neatly depicted by Alexandra Boston with a fine mix of airy sadness with downplayed anguish.
Last to arrive was a pair of blokes who had clearly began their celebrating very early.
This was Lachlan Vivian-Taylor’s Tim, husband to Maya and suffering her rejection in open torment with Ethan Cook’s Lachie – an over-hearty life-of-the-party chancer whose inflated ego and ambitious exaggerations served to trigger, then shape the party from a celebration into a splintered gathering of damaged egos.

I’m not going to describe any of these here, because much of the delight of watching Thirty Three is in the building and shelving of different situations.
It’s enough to say that this rare piece of theatre gives an honest insight of a segment of our society that is rarely scrutinised.

It’s extremely well staged and well worth a visit – but definitely for adults only.
– Colin Mockett

The constellation of life and its myriad experiences are skillfully played out in Thirty-Three: a delightfully mercurial romp.

Newcomer Alexandra Boston shines as Lily, a singer whose raw spiritual vibe is refreshing amid personal upheaval. Returning to the stage after a three-year hiatus, Lachlan Vivian-Taylor delivers a heartfelt and genuine performance as Tim, a caring husband trying to save lost love. Lily and Tim are a joy to behold.

In his fifth performance with TTT, Ethan Cook is enthusiastic as Lachie, a bad boy sales manager who has no limits. In her first role for TTT, Kelly McConville plays Maya, a solicitor whose passion for life is palpable. Lachie and Maya are comedic gems.

This tragicomic masterpiece will have you laughing out loud! The chemistry of the players is moving and real. Careful staging never wastes a moment and allows the actors to shine.

There are times in life when things get out of control and sometimes that’s where the magic happens. At one point, the audience erupts into song, singing along with the TTT players, truly bringing the Thirty-Three party to life.

The memory of this delicious play will stay with you long after you have seen it. It’s a must for anyone who cherishes those around them, in times of chaos as well as fun.