The kitchen sink by Tom Wells 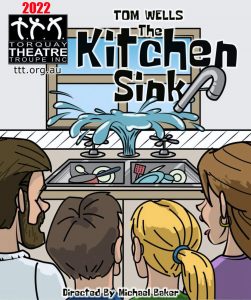 An irresistibly funny and tender play about big dreams and small changes.

Amid the dreaming, the dramas and the dirty dishes, something has to give. But will it be Kath or the kitchen sink?

Things aren’t going to plan for one family in Withernsea, Yorkshire. Pieces are falling off Martin’s milk float as quickly as he’s losing customers and something’s up with Kath’s kitchen sink. Billy is pinning his hopes of a place at art college on a revealing portrait of Dolly Parton, whilst Sophie’s dreams of becoming a ju-jitsu teacher might be disappearing down the plughole.

Tom Wells’ play The Kitchen Sink was first performed at the Bush Theatre, London, in 2011. It won its author the George Devine Award and the Most Promising Playwright Award at the Evening Standard Theatre Awards.

‘This is one of the best new plays I have seen anywhere this year, and I cannot recommend it too highly.’
Charles Spencer – Daily Telegraph

Props – Marie Darby and others

There were a few first night nerves as A Kitchen Sink opened on Thurs night at the Mac, some dialogue swallowed as actors overcame pre-opening hiccups and tried to read the room, but the script by Tom Wells was so good and the laughs from the audience so ready that the cast of five soon settled into their swing and had fun with what is a delightful play.

Set in Withernsea in the north of England sometime between the 1960s and the present, it follows the lives of a close-knit family of four and Pete – played beautifully by Geelong-based Ryan O’Connor- the would-be sweetheart of the daughter of the house, Sophie.

The family is held together by Kath, played by TTT regular Lisa Berry, and as she settled
Into the role and allowed Kath’s expansiveness to shine through Berry showed why the Troupe and their fans are so enamoured of her. Effervescent and ever-positive and supportive, Kath holds each of the members of her family, with all of their differences, in her arms, and, when needed, calls them to account.

We follow the family for a year, the walls of the house quietly wearing the passing of time as we watch son Billy’s Dolly Parton painting morph, the addition of tinsel as we head towards Christmas, and weaving in and out of these shifts, we witness Kath dealing with the malfunctioning kitchen sink with every good housekeeper’s favourite tool, a hammer.

Kath’s increasingly monsyllabic husband Martin was superbly rendered by Fred Preston, who sculpted Martin’s facial expressions and full body surrender perfectly. Preston had the least lines in the show – which is what made it so important that someone with his understanding of how to harness the language of the body played the role.

Son Billy was irrepressible, his flamboyance and intuitive wisdom – and naivety – a delight to watch, and he danced around his Mum with a tenderness and joy that everyone in the audience could feel – and it wasn’t only because we shared his love for Dolly Parton.

Lauren Atkin played Sophie, the daughter on the brink of throwing in her dreams, bringing a wonderful dry wit to her role as Pete’s love interest whilst handling the character’s oscillating emotions with real nuance.

Director Michael Baker has been looking to mount this production for almost two years but, like all things art during the pandemic, the difficulties proved too much. For this reviewer, however, there was something extremely timely in a play with such wit, tenderness and compassion leading the charge towards a Covid-normal, as it truly demonstrated the vital role that theatre can bring to communities – space for renewal, succour and delight.

Do get yourselves to one of the final performances – you’ll go home feeling good about the world – and importantly – with a revived appreciation for the role of theatre and the arts in bringing us together again.

A Celebration of the Ordinary

It’s both appropriate and fitting that Torquay’s TTT chose this play to be it’s first full-length production in its new theatre space.
That is, it’s Shoestring Theatre which the company worked for years to create; opened with flourish with a quickly-assembled clutch of one-act plays and then had to close for two years due to Covid restrictions.
Now here it was under a spanking new lighting rig (the company’s techs clearly having made the most of that enforced break) presenting a play to a second-night full house of expectant locals.  The group has built its following by presenting excellent theatre in the local Senior’s Centre which they regularly temporarily converted into a comfortable, if makeshift theatre. Their palette of plays over two decades covered a wide range, but always with an accent on human stories with a good sprinkling of British humour.
So this Kitchen Sink suited them perfectly.
Playwright Tom Wells’ story set in a Yorkshire family’s kitchen exposed a slice of modern life with its frustrations and joys, its disappointments and limitations all presented with several shades of humour.
There were no murders, no mysteries, no desperate chases – this was a celebration of the ordinary.
And that, in these days of Covid/Climate/Putin uncertainty, is a welcome breath of fresh air.
The play’s plot, in broad terms, had the family’s father stoically clinging to his declining and unprofitable milk-round while his wife, a school-dinner cook, presented her family with unusual and exotic meals to counter her daytime job of producing chips in bulk.
Their gay son, obsessed with Dolly Parton, was unsure about pursuing a place in art college while their little toughie of a daughter, her father’s assistant, spent her time repelling the tentative and tender advances of good-natured sweetheart neighbour who had aspirations to become a plumber.
All this was carefully rolled out and neatly portrayed by an ensemble cast under Michael Baker’s diligent direction.
Fred Preston’s dour, taciturn father was perfectly weighted to contrast his wife, Lisa Berry’s, beautifully portrayed swings of temperament.
Newcomer Will Hamilton gave depth and balance to his edgy anxieties, while Lauren Atkin bristled with authentic awkwardness in resisting the shy and well-meaning advances of Ryan O’Connor.
Thanks to Covid lockdowns, this production has taken two years to stage. With so much rehearsal, it’s understandable that the cast was word and action perfect.  And that prolonged time allowed a good deal of polish, too.
There were a couple of standout scenes – both featuring Lisa Berry’s mother. Her reaction to the younger generation’s smoking a split was worth the price of admission alone; and her venting of frustrations by wildly hammering her malfunctioning kitchen tap was a delight.
I’m not sure that some of the props will survive this production’s run, but I am certain that the Torquay Theatre Troupe will emerge from it with a lot of knowledge and expertise as well as good memories.
Please go to see The Kitchen Sink in Torquay. It’s neat, polished, and entirely suited to its purpose. And it’s very good theatre, too.