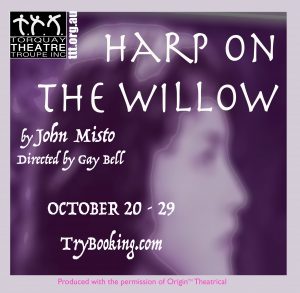 Harp on the Willow – John  Misto

Harp on the Willow is based on the incredible true story of Mary O’Hara, the internationally famous Irish singer and harpist. Grief-stricken by the untimely death of her young husband, she retreats from the world and a promising singing career. A chance meeting with an alcoholic leads to a feisty relationship.

John Misto’s heart-warming play is filled with humour, drama and song as these two troubled people transform each other’s lives.

We are delighted to welcome to the TTT family:

And equally delighted to welcome back:

Congratulations to this talented team. We look forward to what these 8 individuals bring to this beautiful play.

We thank all the other talented auditionees who made our job both difficult and joyful!

Tickets are available now so check in to TryBooking for special seating and Torquay Theatre Troupe on Facebook for further information about this wonderful production and all other TTT events.

Review of TTT’s ‘Harp on the Willow’

The title of John Misto’s play is taken from Psalm 137 which describes the sadness of the Israelites in exile and them “hanging their harps upon the willows”. This is a lovely analogy to encapsulate the period of twelve years when Irish singer and harpist Mary O’Hara, at the height of her fame in 1962, withdrew to a cloistered contemplative order of Benedictine nuns following the death of her beloved husband, American poet Richard Selig, after only fifteen months of marriage.

In a beautifully written play, which explores themes of grief, personal torments and redemption with pathos and humour, we encounter Mary, now Sister Miriam Perpetua, in the abbey in the early 1970s. Having used her time there to work through her grief, the arrival of the cynical alcoholic American Tyrone Kane with his own demons, makes her re-assess how her life should proceed. Carefully interspersed through the piece are flashbacks to the 1950s and the start of her musical career and the time with her husband.

Gay Bell’s obvious enthusiasm for this play shows in her direction and she has guided her actors to give beautifully balanced performances that reveal the sincerity and intensity of the piece as well as the wonderfully comic lighter moments.

Tracey McKeague as Sister Miriam was excellent; she conveyed all the emotion required as we were transported on her journey from nun back to performing artist. Her portrayal of the Sister dealing with the alcoholic Tyrone, only through the Grille in the wall in the abbey, and their gradual ‘friendship’ was a delight to watch. In the role of Tyrone, Michael Baker is exceptional. He travels the road of recovery of the character, going from the disordered, untidy drunk to a man with his life back on track, with amazing versatility both in his emotional range and his physicality. This was an outstanding performance.

As Mother Raphael, Theresa Lewis makes the most of Misto’s dialogue for the indomitable Mother Superior and offsets the hilarity with the reasoned, supportive approach in a well measured portrayal.

Flash-backs to Mary’s younger years and her time with husband, Richard, are tenderly brought to life by Theresa Horgan and Lachie Errey. Both gave performances that established their relationship as a couple and set the scene convincingly for the older Mary.

As one might expect of a play about a singer, there are some musical interludes, both original recordings of Mary O’Hara and beautiful live performances from the two Marys which Musical Director, Erika Turner had chosen well. There was also a lovely selection of scene change music which set the tone of the play well.

The set design team of George Carman, June Marks and Gay Bell created the many locales and the stage crew accomplished the various changes well, although sometimes a little long. I also felt the moving of the “Grille wall” up and down stage unnecessary. Given the depth of the performing area, it could have stayed in place without masking any of the other action but that’s a minor quibble.

Lighting (Gregorio Palmes), sound (Ben Batterbury and Fred Preston) and projections (Fred Preston) all convincingly added to the overall look of the production.

It’s always great to see a new or little-performed work, so congratulations to TTT for providing a most enjoyable evening of theatre.

Postscript: The Stanbrook Abbey Community relocated to Yorkshire in 2007-2009 and the original buildings in Worcester were sold and the property is now a luxury hotel. One imagines the nun’s cells have been updated somewhat!

Harp on the Willow  directed by Gay Bell for Torquay Theatre Troupe. Shoestring Theatre, Torquay, October 20, 2022.
This delightful play won its full-house first night audience’s hearts in so many ways. Its beautifully crafted script, written by Australian author and playwright John Misto in 2007, was based on a true-life incident in the life of Irish singer Mary O’Hara.
Its funny, poignant and moving themes were sensitively delivered by an acting team that brought out every nuance and the result was a glorious piece of theatre.
Mary O’Hara was a sweet-voiced singer-harpist who enjoyed success in Ireland, Britain and America in the mid 20th Century. Following the death of her much-loved American husband, Mary entered an enclosed convent of nuns in an English Abbey to recover. There, the restrictive regime and enforced silences helped her through her grieving process and she became a conscientious sister. That was, until her healing calm was interrupted by the demands of an awkward, unwanted American visitor. He, an irreverent drunken atheist, challenged and undermined her blind-faith devotion to the extent that their platonic relationship changed not just their lives, but also those around them.
Given this outline, the resulting play could have been dated,  over-sentimental or mawkish, but in the hands of experienced TTT director Gay Bell and her team it was none of these.
This Harp on the Willow was grounded in human dilemmas, underlined with truths and threaded through with flashes of sublime humour.
It was, in short, an evening of theatrical joy.
Played out on a simple set, director Gay Bell’s light touch allowed her well-cast team of players to deliver that beautifully-crafted script with the minimum of distractions.
The action began with Mary’s religious persona, Sister Miriam Perpetual, played with devotional style by Tracey McKeague, meeting for the first time her tormentor/liberator Tyrone, played by rollicking Michael Baker. Both are excellent actors with authentic accents. He really is American, she is Irish-born. As is her lookalike Theresa Hargan, who played the younger Mary in flashback scenes. This neat ploy showed Mary falling for her poet-husband, Richard Selig, then caring for him through his terminal cancer. Richard and this progression was portrayed with sensitivity by Lachie Errey, while Michael Baker’s own transformation from raging drunk to wry sobriety was an acting masterclass.
Theresa Hargan handled her own transitions – from reluctant girlfriend to caring wife – with unwavering loyalty, perfectly setting the scene for Tracey McKeague’s skilled handling of her own character’s complex relationships with religion, death and the chaos brought by her intrusive visitor.
Tracey achieved this with skilled assurance and both incarnations of Mary sang beautifully.
As did the well-chosen support nuns Theresa Lewis and Lynne Elphinston-Gray. Theresa brought warmth and understanding to her Mother Superior role while Lynn also added an off-stage voice of comradeship.
Andrew Gaylard’s voice was also off-stage while on-stage he added a neat cameo of a wise confessor priest; while  Ariel Tzafrir added two distinct and absolutely correct extra voices.
Add in a particularly well-chosen list of scene-transition songs and hymns – from nun’s choruses and chants to Mary O’Hara’s own records spiced with segments from Eartha Kitt among others – plus some heavenly subtitles projected onto a cloud – and the result was altogether a fine piece of absorbing, delightfully human and unexpectedly humorous theatre.
And its opening night audience loved and lapped up every moment.
You will, too. Don’t miss this Harp on the Willow.

Torquay Theatre Troupe doesn’t disappoint with its latest offering, Harp on the Willow, the moving story of a chapter in the life of Irish soprano and harpist Mary O’Hara.

Written by John Misto and skilfully directed by Gay Bell, the play’s action centres on the 12 years Mary spent in an English convent. Following the tragic loss of her young husband Richard, she retreats from a successful music career and takes her vows, becoming Sister Miriam.

Her peaceful life is disrupted by the arrival of alcoholic Tyrone, also consumed by the grief of losing a loved one too soon. Although the two are chalk and cheese, they develop an unlikely friendship that changes their lives. Both find happiness in new marriages and Mary resumes her music career.

Two talented actresses, making their TTT debuts, share the lead role. Theresa Horgan, who bears a striking resemblance to the real Mary, plays Mary as a young woman establishing her career, falling in love and marrying. She gives a beguiling performance.

Tracey McKeague plays Mary following her transformation into Sister Miriam. The emotional heft of the play rests squarely on her shoulders and she carries it with great aplomb.

Production values are the usual high standard audiences have come to expect from the troupe. The beautiful music, directed by Erika Turner and performed live and recorded, is a stand-out.

Harp on the Willow is a theatrical experience that evokes laughter, tears and ultimately uplifts. Well done TTT for bringing this heartwarming play to Surf Coast.

Watch the demolishment of the set of Harp on the willow.: https://youtu.be/gK1iUgC_kYE