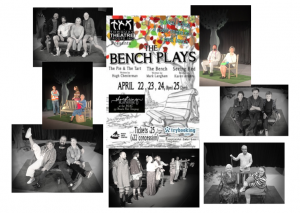 The Bench Plays – The very first plays produced by TTT in the new (MAC) Arts Centre.

Play 1 – The Bench by Mark Langham 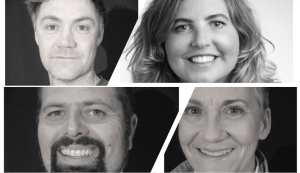 Play 2 – The Pie and The Tart by Hugh Chesterman 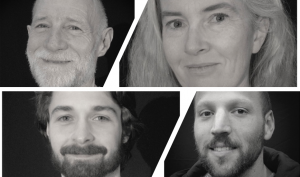 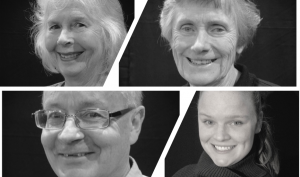 Off The Bench – Torquay’s new venue and brand new start

Yes, you read it right, Torquay has a new performance space, The Shoestring Playhouse,  and it’s solely due to this troupe that it exists. After years of performing on a borrowed stage thanks to the generosity of the town’s Seniors Centre, TTT petitioned, appealed and wrangled with its local and State governments to gain the town’s first arts centre. They achieved tenancy to what was previously a central basketball arena on their promise to turn into a performance facility. Tellingly, the town’s basketball community moved to a brand spanking new facility in the Shire’s ‘community and civic precinct’ at the northern entrance to Torquay. One day someone will write a play about Australian governments’ obsessional funding of sport at the expense of the arts – and this venue will be such a good venue to stage it.

But in the meantime, we experienced the TTT company’s sheer delight at having a space of its own. Smiles were everywhere and the whole sold-out first performance was framed in an atmosphere of goodwill. The new theatre took up around half of the previous arena along with its large foyer. Here, the opening night audience was greeted with complimentary drinks before entering what was clearly a temporary stage-set-up using the company’s old Senior’s Centre risers along with heavy black curtains and dividers borrowed from other local companies.  And high above the stage, the building still showed its original purpose with a basketball hoop stored in its withdrawn position. All this – and the initial production – revealed the company’s haste to stage an opening production to show its pride in the new venue.

For The Bench Plays was just that. A cobbled-together three short plays that needed no scenery or scene changes just a central bench and a stage tree and door.  The first, The Pie And The Tart , directed by Zina Carman, was based by its writer, Hugh Chesterman, on a 600-year-old French fable. It was set in that place and time and displayed how a beggar, neatly played by Ben Batterbury, could pull the wool over the eyes of a pompous bigwig and his wife by his street-wise quick-thinking. This drew admiration from his animated fellow beggar played by newcomer Greg Palmes and bewilderment from the duped couple portrayed by stuffy Robert Roseburgh and his marginally cannier wife Sindi Renea. The second play, simply called The Bench was written by Mark Langham and directed by Lachlan Vivian- Taylor. Here we saw a composed senior citizen, Anita Rezzara quietly people-watching from her bench seat until she was interrupted by two younger people. First by Ethan Cooke’s dispirited salesman who was half-heartedly chasing his runaway dog and then by Frances Corke’s unlikely umbrella mugger. In the play’s short course, Anita’s calm common-sense suggested solutions to their problematic lives. The final play, Seeing Red, written by Karen Ankers and directed by Gay Bell, was an absurdist look at a future world where the practice of knitting is banned because of its dangerous needles. Here, Carleen Thoernberg was the central bench-sitter calmly knitting what looked like a red blanket to the consternation of young impressionable Lauren Atkin and rigid die-hard in Kevin Fitzpatrick. True to its absurdist theatre form, the storyline took much deeper blacker – and redder – hues.

Circumstances dictated that Torquay’s new theatre had this somewhat lightweight, whimsical start.  But this trio of plays was really a statement of intent. Though brought together quickly and staged with the minimum of resources, the plays all showed TTT’s trademarks of assured, sure delivery. Every player on stage was word and action perfect, even the promising newcomers. That’s another company distinction. But the real thing that we all took from this production was the promise of what’s to come once Torquay’s theatricals build further to create curtains, props – the whole theatre experience. For the sheer joy on the faces of Torquay Theatre Troupe members as they relished the prospects of their new venue said everything about this occasion. And for our region’s theatre patrons, it’s very much a case of ‘watch this space’ – because I’m sure there’s a new arts powerhouse set to bloom.