When you open the gallery, you can move through the images using the arrow keys on your keyboard.

First performed in 2007, Parramatta Girls is a performance piece adapted from interviews with women who, as girls, were incarcerated in the notorious Parramatta Girls Home in Sydney, located at the site of the convict Female Factory. All of the characters depicted are composites of former inmates based on the experiences and memories of the interviewees. As an audience we meet a group of middle-aged women attending a reunion at the Parramatta Girls Home in 2004, but the same actors also play their younger selves as they recall the depravity and degradation of their imprisonment during the 1960s. Powerless and silenced as girls, the women finally speak their truth and, pulling no punches, they bring the audience with them. Director Zina Carman was challenged in casting the play as there are a disproportionate number of indigenous women among the characters. Wanting to tell their important story, she cast a group of women who may not have been indigenous but who could empathise and give the characters life.
A sophisticated lighting plot by Fred Preston, incorporating a shadow silhouette of metal bars and changes from warm to cool lighting to differentiate scenes in the present from those in the remembered past, worked well. The spotlight situated on the floor stage-right, for the entrance to the Home, left the actors faces in half-shadow, particularly the character of Lynette (Terry Roseburgh), who spent Act I hovering fearfully at the gate. Ethan Cook’s sound design, which included a ghostly sound effect to indicate the past from the present, was subtle and well-timed. The stage set, designed by the director with George Carman and Michael Baker, was small and was extended by use of the floor in front of the stage as the exterior of the Home. June Mark’s scenic design, of a girl and her teddy bear, taken from a photograph used in the production’s publicity, was well executed and evocative, as was the brickwork in the isolation cell. An upstage door was used throughout the performance for scenes both in the past the present of the play through which the performers were required to queue to file out, slowing pace and breaking the tension. The rough wooden benches added to the chilling atmosphere of the scenes. Barb Rindfleisch’s props were carefully selected. Costuming was simple but effective as the adult women donned grey tabards to assume their teenaged personae.
Among the performances, in what is an ensemble piece, I was drawn to Georgie Powell’s performance as Maree, a sensitive portrayal of the girl who never left the institution. Lynne Elphinstone-Gray’s performance as Coral was the strong and proud indigenous woman who found the resilience to take on the system. Terry
Roseburgh’s Lynette, so traumatised by her time at the Home she feared walking through the door, was authentically pitiable. The cast included Lisa Berry (Marlene), Karen Long (Melanie) whose native Irish accent did not seem at all out of place, Sindi Renea (Gayle), Danielle Rowarth (Judi) and Debra Shaw (Kerry). Parramatta Girls was a passion project for Zina Carman who overcame the many challenges of staging the production to find a large and attentive audience at the performance I attended. The subjugation of those children, and the abuse and privations they suffered outside and inside the Home, were told with shocking realism. The strategies they used to survive, and the impact of those decisions, were also displayed. As the reunion, and the performance, wound up there were flickers of hope and reconciliation in their mutual recognition as survivors.
Torquay Theatre Troupe’s production of Parramatta Girls was difficult to stage and to watch but it had so much to recommend it, not the least being, that we must never allow those abuses to recur on our watch. Congratulations, and thanks, to all involved. 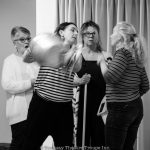 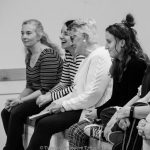 It was a brave decision by director Zina Carman to stage this play set in Sydney’s Parrammatta Girls Home in the 1960s at Torquay’s Price St Theatre. The cosy atmosphere with pre-show drinks and interval tea and biscuits sat in stark contrast to the dark stories of sexual and physical abuse to girls aged between 13 and 16, that she was unfolding.

Theatrically, it was more than brave - courageous and foolhardy, perhaps - for her to ask eight mostly middle-aged white female actors to depict those girls, three of whom were indigenous. Added to this, one of her actors was making her stage debut, another was returning after a 20-year hiatus and a third after taking a two-year break. Some would say the director’s decision appeared more than brave, it was foolhardy.

More so given that previous performances of Parramatta Girls since its 2006 debut had been criticised for playwright Alana Valentine’s jumpy ‘cut and paste’ methods when using the real testimony of the institute’s surviving girls.

But I’m here to tell you that despite all of the above, this flawed production of Parramatta Girls was extraordinarily effective.

That was because it carried the most powerful message of any play that has appeared on our stages this year. I could argue that for many, many years previously, too.

And it was that use of white middle-aged actors to mouth the real words of aboriginal girls after being abused by their white male warders that gave this play such potency.
For in the cosy Torquay Theatre, (which is really a borrowed Senior Citizens Centre with notices on the wall advertising U3A classes and coach outings to the Chocolate Cafe) were stories being enacted that made the #metoo allegations against Harvey Weinstein appear almost innocuous.

Those harrowing stories of systematic intimate abuse seemed to take on more impact because they were delivered in Karen Long’s gentle Irish, Danielle Rowarth’s muted Kiwi or Terry Roseburgh’s refined US accents. They were enhanced by Lisa Berry and Sindi Renea’s sympathetic acting skills and by Lynne Elphinston-Gray’s inborn dignity. Then they were strengthened by Debra Shaw’s recognisable frailty and Georgie Powell’s youthful vulnerability.

So that jumpily erratic script, occasional slow scene-shifting and first-night fluffs - along with the actors incongruity - were completely overlooked by this production’s packed premiere audience who sat in awed silence throughout. Until the end, that was, when they burst into appreciative applause.

As we left, one woman asked her friend in hushed tones “how many times have they got to do that? It must be traumatic for them.” She was talking about the actors. I was wondering what the real Parramatta girls would have thought…

I do recommend that you go see this Parramatta Girls and take the opportunity to look past the obvious and see one of Australia’s darkest secrets exposed to the sort of cleansing exposure that only theatre can provide.

The play was staged as a reunion of eight former-inmates of the Parramatta Girls Home - now grown women - in 2003, forty years after they finished their respective terms.

It moved between the present (the reunion) and the remembered past (in flashbacks).

The play opens in the courtyard of the Home, November 2003. The women begin to arrive at the reunion, (some more tense than others), and congregate outside the institution’s iron gates.

When they step through the gates, the audience is taken on a journey between the past and present as the women explore the building. In flashbacks, the girls re-enact each other’s experiences at the home: their arrival (and the court trial that brought Marlene there), their medical examinations by ‘Dr Fingers’, their chores, their abuses and mistreatments - sometimes by invisible guards, sometimes to one another and sometimes in acts of self-harm.

As the play comes to a crescendo in the second Act, the past and present merge on-stage. Two of the girls attempt to escape the institution and their torment, but after being told that a particularly dangerous guard is after then, they climb to the roof of the Home and refuse to come down. A riot ensues, involving all the girls but comes to an end when tragedy strikes the group.

The grown women are left to clean up the mess of the riot (their literal past), which clears a path for the women to come together, to open up, and to reveal harboured secrets, lies, and truths and "wash away" (some of) their past. This activity leads to the end of the play, and the women ask that their stories be remembered and leave the audience with a message of hope for good, for remedy, and for claiming their own futures as women, mothers, and Parramatta Girls.