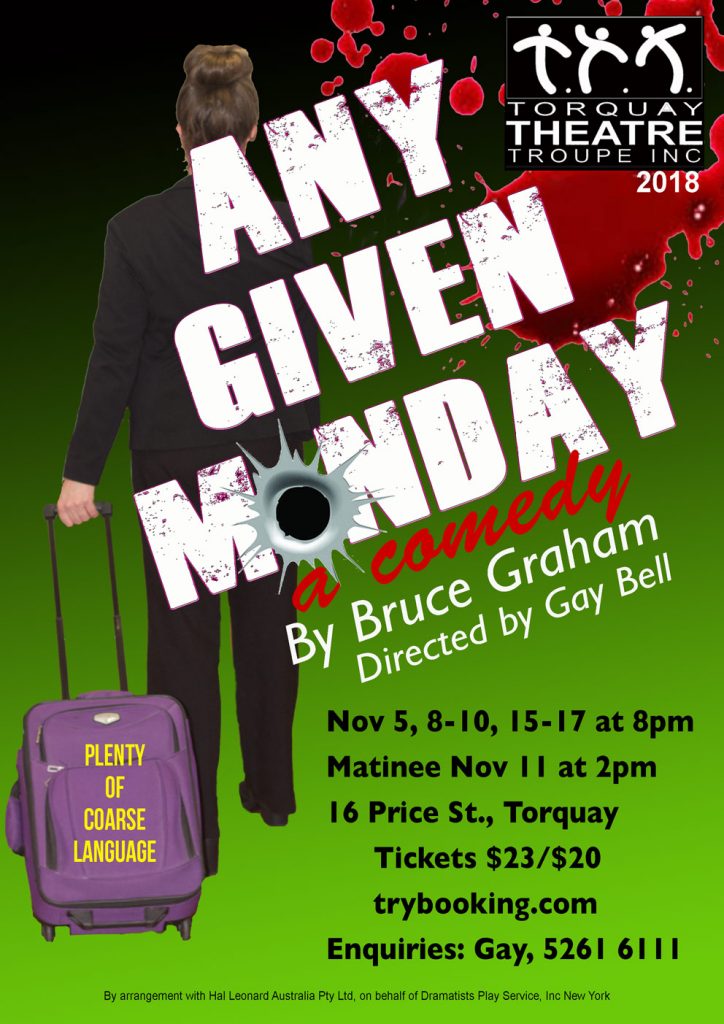 Set in contemporary Philadelphia, we find that teacher Lenny’s (Fred Preston) wife, Risa (Lisa Berry), has left him for a sleazy property developer and Lenny’s friend Mickey (Michael Baker) has “done Lenny a favour”. When Lenny’s daughter (Siobhan Linde) comes home on a surprise visit from her University course, she has a new perspective on the situation. This may make you feel guilty for laughing…

Victorian Drama League Review of ‘Any Given Monday’.

Any Given Monday review by Colin Mockett of Entertainment Geelong

Any Given Monday – a joyful romp through political correctness

Torquay Theatre Troupe holds an enviable reputation for producing good theatre experiences in its comfortable, but makeshift venue. That reputation, built over 16 years, usually began with the friendliness of its company, which traditionally served its patrons a welcoming sherry, then delivered a well-performed straight (non-musical) play to a much higher theatrical standard than could be expected in a borrowed Seniors’ Centre hall. The plays were generally small, selected to fit into the venue’s limited space. And over the years, the Troupe’s actors and directors have gained in experience and excellence to the point that they regularly deliver performances of consistently high quality.

As an anticipatory experience, patrons arriving to see Any Given Monday were not offered sherry. They were invited to begin with a glass of celebratory bubbles. And when the play began, we, the audience, understood why. Because Any Given Monday signalled a lift in performance to the next level. This was a play that sparkled with theatrical wit and vulgar vigour. It bubbled with energy and insights, posing moral dilemmas while exposing modern lifestyle problems. And it was very, very funny, while leaving plenty of food for thought. The play’s programme was honest in that it didn’t warn of swearing. Instead, it’s front page proclaimed that the show contained ‘plenty of course language’. That was delivered, and then some – but always in the correct f*cking context. The programme had warned several times, too, that the play was ‘politically incorrect’. It wasn’t. It was a happily, joyfully and extremely funny romp through the garden of political incorrectness picking up blossoms of insight and widely scattering seeds of irony. This play provoked laughter, understanding and moral conundrums in about equal measure as it danced through the perplexing dilemmas of living in the toxic culture of America today.

And on the way, it delivered a memorable night of theatre.

The plot line (and I won’t go into detail, because I want you to see it and experience this play’s cleverly concealed surprises), hinged around the break-up of a 17-year marriage between Fred Preston’s worthy Philadelphian Jewish academic Lenny, and his aware, astute but bored wife Risa, neatly and lightly portrayed by Lisa Berry. Holed up at home and wallowing in self-imposed misery, Lenny is visited by his best mate, Mickey, (Michael Baker) who had decided to intervene in a hearty, cynical, red-necked and very positive way. This action threw up a raft of moral dilemmas and awkward social positions, exacerbated when Lenny’s daughter, (Siobhan Linde), arrived to help, too. She’s a student of philosophy with her own reservations on the moralities of modern living. And if all this sounds like a complicated night of theatrical concentration – it wasn’t. Because director Gay Bell’s unobtrusive control allowed writer Bruce Graham’s witty and so-funny convolutions to be delivered in memorable, adult style, by four outstanding actors. These were led by Michael Baker, whose Mickey was pure delight. His command of his character led to the audience sympathising with, and laughing at almost all of his outlandish and illegal ideas and activities. And his portrayal was beautifully balanced by Fred Preston’s measured performance as Lenny, whose control throughout neatly set up the play’s unexpected – and very funny final twist. This involved Lisa Berry’s Risa, whose straying wife character was in turn believable, sympathetic and perplexed. As Sarah, Siobhan Linde made her puzzled acceptance and abandonment of philosophical positions within her complicated philosophy totally understandable. All four are nominated for our Best Actor awards, and the director and whole production is nominated, too. Go see Any Given Monday and you’ll understand why. It’s a rollicking, laughter-filled theatrical delight that will leave you thinking – and even questioning your beliefs.

It is, in short, champagne theatre from Torquay.