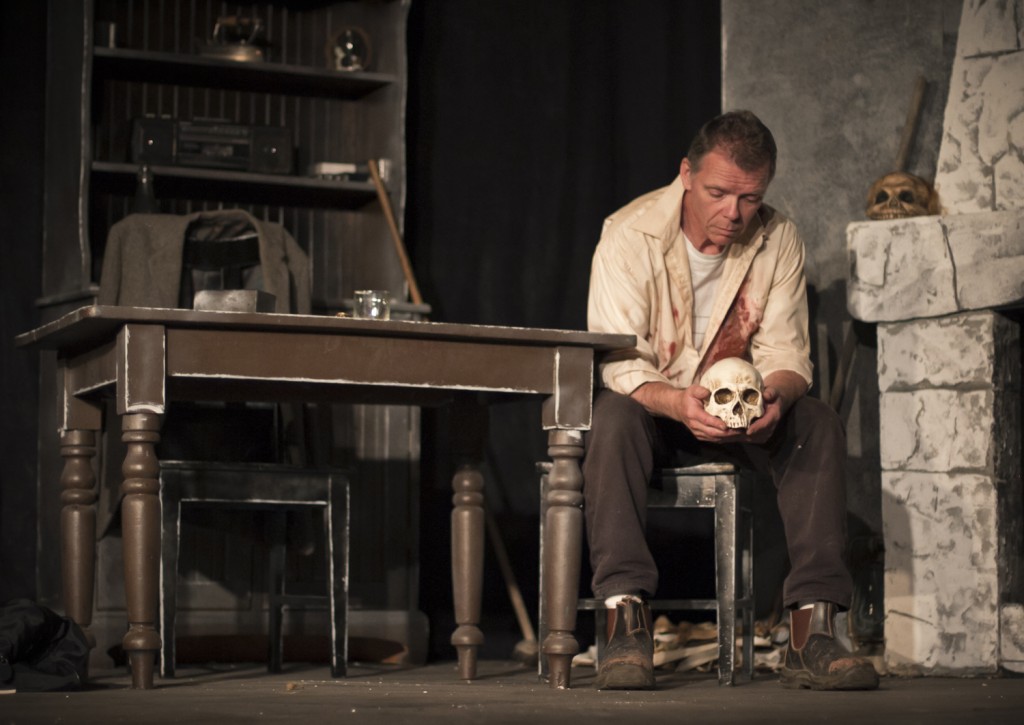 The show was also performed twice at the National Celtic Festival in Portarlington on the Bellarine Peninsula.

Here’s a recent review by Brian Eaton for Entertainment Geelong

REVIEW – A SKULL IN CONNEMARA

Modern Irish comedy at its best

A Skull in Connemara by Martin McDonagh directed for the Torquay Theatre Troupe by Glen Barton, May 2015.

Martin McDonagh is one of the most successful young playwrights of his generation with the distinction of being the first to have four plays running simultaneously in London’s West End. McDonagh’s plays are black comedies in which cruelty and violence sit underneath the blarney. They are laced with satire and presented without a shade of sentimentality. Black they may be, but they are funny, feckin’ funny and A Skull in Connemara is no exception. It is so dark and the images drawn by the playwright so bleak that some may be embarrassed to laugh at what are outrageously funny scenes.

Let’s start with the macabre story line. The local graveyard is so small that the residents are turned over (no pun intended) every 7 years. Grave digger Mick Dowd played by TTT regular Fred Preston has the job of making room for the new tenants. The disinterring however will unearth the bones of Mick’s wife who died over 7 years ago when her intoxicated husband drove their car into a ditch. In a village where people have too much time on their hands and in spite of being cleared of anything more violent than drink driving, persistent rumours suggest however that she died at the hands of Mick himself.

Fred Preston’s understated and skilful characterisation of Mick treads the line between possible murderer and victim of scurrilous gossip, between happily married husband and psychopath. Fred subtly sows the seeds of doubt in the audience’s mind with a roundly nuanced performance that retains their sympathy.

Mick is often visited by a neighbour Maryjohnny Rafferty who carries a 27 year old grudge against some kids who called her fat. Lisa Berry’s portrayal of this whiskey-loving, bingo fanatic granny is superb. Another TTT stalwart, Lisa is so comfortable in the role that even when it becomes clear she visits Mick to access his poteen and her enthusiasm for bingo may be driven by her desire to cream off some of the takings destined for ‘darkie’ children in Africa, the character doesn’t loose any credibility.

Completing the quartet of characters are Maryjohnny’s grandchildren. Mairtin Hanlon, a gormless young man whom the priest has sent to help Mick and his elder brother Thomas Hanlon, similarly bereft of some IQ points, who is the local policeman trapped between his local duties, like attending the grave digging, and his desire to be a detective.

In his first performance at Torquay, P. J. White gives an enthusiastic portrayal of Mairtin as a village lout whose scenes with Mick convey the desperation of the locals waiting for something to happen, anything really…….like somebody being so drunk they drown in a bucket of piss. An unpleasant image no doubt, but in McDonagh’s hands and via P.J. White’s talent as an actor, a novel vehicle for humour.

Lachlan Vivian-Taylor is a relative newcomer and valuable addition to TTT. He plays Thomas Hanlon, the local member of the Garda desperate to enter the investigative branch of the force and certain that he has the talent to do so, based on watching American TV cop shows. Lachlan’s policeman is real despite the enormous gap between the banality of his current duties and his elevated aspirations, which the audience realise are unachievable.

In his directorial debut, Glen Barton reveals himself to be a lover of things Gaelic and it shows. Not only is he the fiddler in the ‘foyer’ playing original music composed by his wife Kristel Rae, but his tight direction ensures that this macabre, hard to believe Irish tale may indeed be, if not likely, then at least possible. He resisted any attempt to give precedence to the many humorous punch lines in the play and each character played their role with sincerity and a wonderful adherence to the accent of western Ireland. Voice coach Karen Long should be very pleased.

The use of music during some of the dramatic scenes added significantly to the atmosphere as did the smell of soil and earth during the grave digging. The set with lit hearth and crucifix was designed and constructed by Glen Barton, Michael Baker and Iain Lambert, Jenny Stewart did the lighting and Don Bennett and Jock Hassock the sound. To complete the list of credits I must acknowledge Assistant Director Stuart Errey, Producer Gay Bell and Stage Manager Zina Carman.

I strongly recommend that you see this play in which imagination eclipses reality and laughter is, if not king (at least in Ireland), then the order of the day. 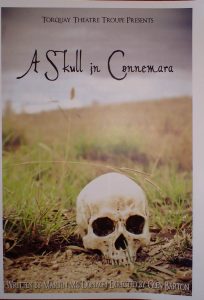 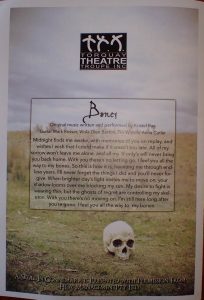 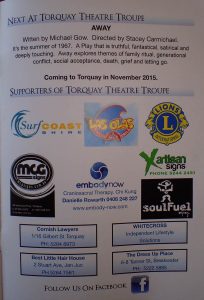 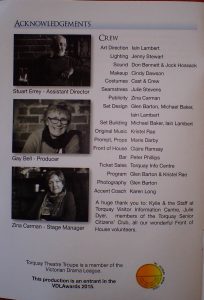 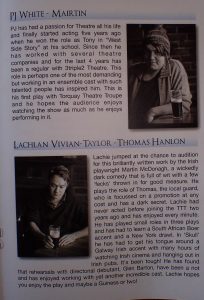 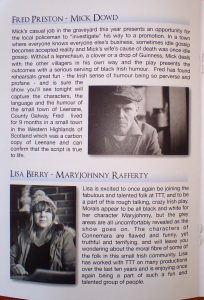 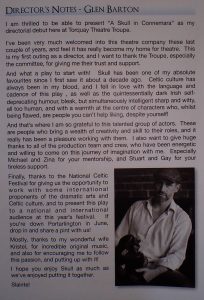 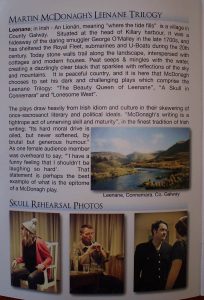